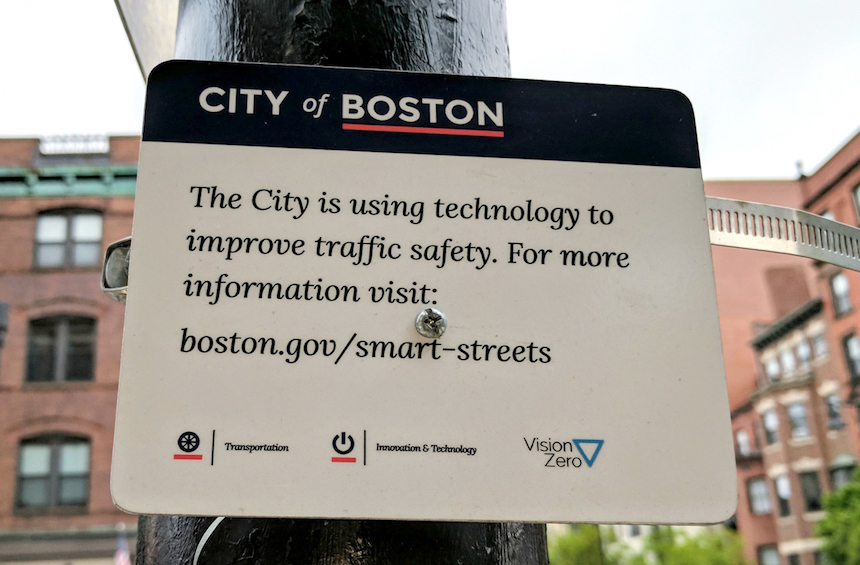 Verizon is using the city of Boston as a test bed to find out if a network of wirelessly connected cameras and sensors, alongside advanced algorithms that analyze people’s behavior on the road can make dangerous junctions and intersections less hazardous, MIT Technology Review reports. The tech giant started collecting data at Boston’s most hectic intersection in March. The data, which can evaluate the effectiveness of changing traffic signal timings, installing a bike lane, and other interventions, will be used to redesign the city’s streets, says Vineet Gupta, director of policy and planning for the Boston Transportation Department.

Boston intends to use this “smart streets” technology, which if successful could be adopted by other cities, to eliminate traffic fatalities citywide by 2030.

From 2015 to 2016, sixteen pedestrians and bicyclists were seriously injured, and a bicyclist was killed after colliding with a flatbed truck at the junction of Massachusetts Avenue, a four-lane road, and Beacon Street, a three-lane, one-way street, where Verizon has chosen for the data collection. The intersection is located near a major bridge connecting Boston to Cambridge.

This project necessitates a shift from the traditional approach to traffic data collection in Boston, which, like other cities, collects traffic data manually and depends on industry standards, not local information, for its traffic-management designs. The intersection now has fifty cameras and sensors, including “quad cameras”- each containing four smaller cameras that can pan, tilt, and zoom in different directions- and infrared cameras with thermal imaging –  useful for recognizing traffic activity in snow and rain. Verizon also installed, underground, dozens of magnetometer sensors that detect the velocity, number, and size of passing cars, trucks, and buses by recording a change in frequency when large metal objects move over them. In addition, radars for sensing bicyclists were installed because most bikes do not have enough conductive material to activate the magnetometers.

The tech giant is tracking twelve traffic “events” for Boston. They mostly relate to vehicles encroaching on crosswalks and bike lanes, not yielding to pedestrians, and double parking. The number of cars and bikes that run red lights would also be counted. All this would be done by correlating the sensor data with bus-location data provided by the city, and software that can detect when a traffic light is red, yellow, or green at any point in time. Verizon’s algorithms analyze these streams of information and look for “trigger” interactions like the video footage of a car nearing a bike lane. The data points are then mapped into information from other sensors to determine if it qualifies as one of the twelve complex traffic “events.” The city has pledged not to issue tickets or enforce traffic laws with the information; and according to Verizon, the video data would be erased after seven days and the company would not keep any records linked to individual people or vehicles.

Another half dozen intersections along Massachusetts Avenue may soon be covered by the smart-streets program, according to the city’s plans, to track how the road functions as a traffic corridor throughout downtown Boston. It may also add sensors that measure air quality to monitor and eventually reduce pollution.

Boston’s commitment to cut down traffic fatalities stems from Vision Zero movement, which started in Sweden in 1997 and has been adopted by more than twenty-five U.S. cities, including Chicago, Los Angeles, New York, San Francisco, and Washington D.C. Vice President of Verizon’s Smart Communities, Lani Ingram, says she hopes to sell similar systems to those cities. Smart-city technologies like light poles that can broadcast emergency announcements, and Wi-Fi-powered sidewalk kiosks that host information about local events, are currently being offered on trial by Verizon in Minneapolis; New Rochelle, New York; Sacramento, California; and Seattle.

0
donetmsiteserversecuusda June 4, 2017
No Comments Yet