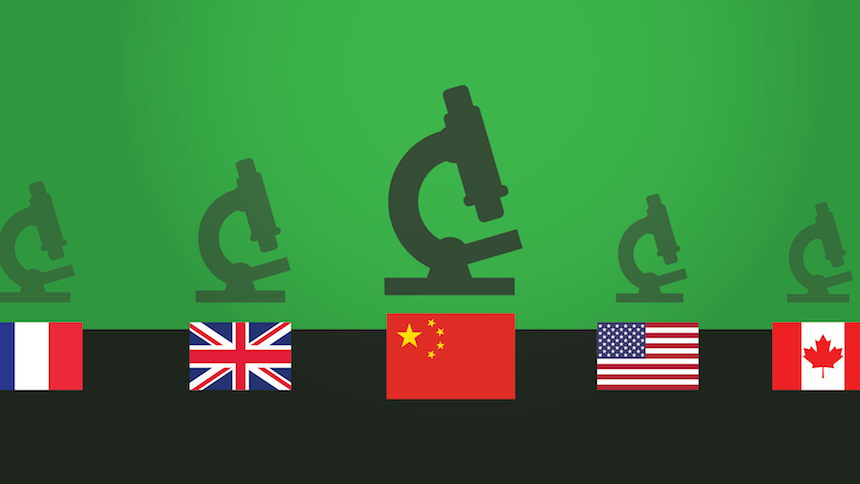 American scientific teams still publish significantly more biomedical research discoveries than teams from any other country, a new study shows, and the United States still leads the world in research and development expenditures.

But American dominance is slowly shrinking, the analysis finds, as China’s skyrocketing investing on science over the last two decades begins to pay off. Chinese biomedical research teams now rank fourth in the world for total number of new discoveries published in six top-tier journals, and the country spent three-quarters what the United States spent on research and development during 2015.

Meanwhile, the analysis shows, scientists from the United States and other countries increasingly make discoveries and advancements as part of teams that involve researchers from around the world.

The last fifteen years have ushered in an era of “team science” as research funding in the United States, Great Britain and other European countries, as well as Canada and Australia, stagnated. The number of authors has also grown over time. For example, in 2000 only two percent of the research papers the new study looked include twenty-one or more authors — a number that increased to 12.5 percent in 2015.

U-M says that the new findings, JCI Insight by a team of University of Michigan researchers, come at a critical time for the debate over the future of U.S. federal research funding. The study is based on a careful analysis of original research papers published in six top-tier and four mid-tier journals from 2000 to 2015, in addition to data on R&D investment from those same years.

The study builds on other work that has also warned of America’s slipping status in the world of science and medical research, and the resulting impact on the next generation of aspiring scientists. “It’s time for U.S. policy-makers to reflect and decide whether the year-to-year uncertainty in National Institutes of Health budget and the proposed cuts are in our societal and national best interest,” says Bishr Omary, M.D., Ph.D., senior author of the new data-supported opinion piece and chief scientific officer of Michigan Medicine, U-M’s academic medical center. “If we continue on the path we’re on, it will be harder to maintain our lead and, even more importantly, we could be disenchanting the next generation of bright and passionate biomedical scientists who see a limited future in pursuing a scientist or physician-investigator career.”

The analysis charts South Korea’s entry into the top ten countries for publications, as well as China’s leap from outside the top 10 in 2000 to fourth place in 2015. They also track the major increases in support for research in South Korea and Singapore since the start of the twenty-first Century.

Meticulous tracking
First author of the study, U-M informationist Marisa Conte, and Omary co-led a team that looked carefully at the currency of modern science: peer-reviewed basic science and clinical research papers describing new findings, published in journals with long histories of accepting among the world’s most significant discoveries.

The analysis included only papers that reported new results from basic research experiments, translational studies, clinical trials, metanalyses, and studies of disease outcomes.  Author affiliations for corresponding authors and all other authors were recorded by country.

The rise in global cooperation is striking. In 2000, 25 percent of papers in the six top-tier journals were by teams that included researchers from at least two countries. In 2015, that figure was closer to 50 percent. The increasing need for multidisciplinary approaches to make major advances, coupled with the advances of Internet-based collaboration tools, likely have something to do with this, Omary says.

The authors, who also include Santiago Schnell, Ph.D. and Jing Liu, Ph.D., note that part of their group’s interest in doing the study sprang from their hypothesis that a flat NIH budget is likely to have negative consequences but they wanted to gather data to test their hypothesis.

They also observed what appears to be an increasing number of Chinese-born scientists who had trained in the United States going back to China after their training, where once most of them would have sought to stay in the United States In addition, Singapore has been able to recruit several top-notch U.S. and other international scientists due to their marked increase in R&D investments.

The same trends appear to be happening in Great Britain, Australia, Canada, France, Germany, and other countries the authors studied – where research investing has stayed consistent when measured as a percentage of the U.S. total over the last fifteen years.

The authors note that their study is based on data up to 2015, and that in the current 2017 federal fiscal year, funding for NIH has increased thanks to bipartisan Congressional appropriations. The NIH contributes to most of the federal support for medical and basic biomedical research in the United States But discussion of cuts to research funding that hinders many federal agencies is in the air during the current debates for the 2018 budget. Meanwhile, the Chinese R&D spending is projected to surpass the U.S. total by 2022.

“Our analysis, albeit limited to a small number of representative journals, supports the importance of financial investment in research,” Omary says. “I would still strongly encourage any child interested in science to pursue their dream and passion, but I hope that our current and future investment in NIH and other federal research support agencies will rise above any branch of government to help our next generation reach their potential and dreams.”

Results from the First Global Brain Wave Measurement Show Power, Not Money, Is the New Religion

0
donetmsiteserversecuusda June 19, 2017
No Comments Yet