Mobile health apps are a booming market targeted at both patients and health professionals. Medicines-related apps help patients track their prescriptions and remember to take their pills. They also provide drug information to help clinicians prescribe and administer medications.

However these apps also pose unprecedented risk to consumers’ privacy given their ability to collect user data, including sensitive information that is highly valuable to commercial interests, new research demonstrates.

Published in BMJ, the research team – from the University of Sydney, the University of Toronto and University of California – set out to investigate if and how user data is shared by top rated medicines-related mobile apps. It also sought to characterise privacy risks to app users, both clinicians and consumers.

The researchers found sharing of user data by medicines-related apps is routine but far from transparent, and also identified a small number of commercial entities with the ability to aggregate and potentially re-identify user data.

“Privacy regulators should consider that loss of privacy is not a fair cost for the use of digital health services,” said lead author Assistant Professor Quinn Grundy of the University of Toronto and University of Sydney School of Pharmacy, Charles Perkins Centre.

How data is shared

The research team identified 24 top rated medicines related apps for the Android mobile platform in the United Kingdom, United States, Canada, and Australia. All apps were available to the public; provided information about medicines dispensing, administration, prescribing, or use; and were interactive.

They then ran laboratory-based traffic analysis of each app downloaded onto a smartphone, simulating real world use with four dummy scripts.

“The idea is to capture a baseline of the normal network data that an app causes, and then change privacy-related settings in the app. The places where the new settings turn up in any fresh network data shows us where and to whom the app is leaking it.” 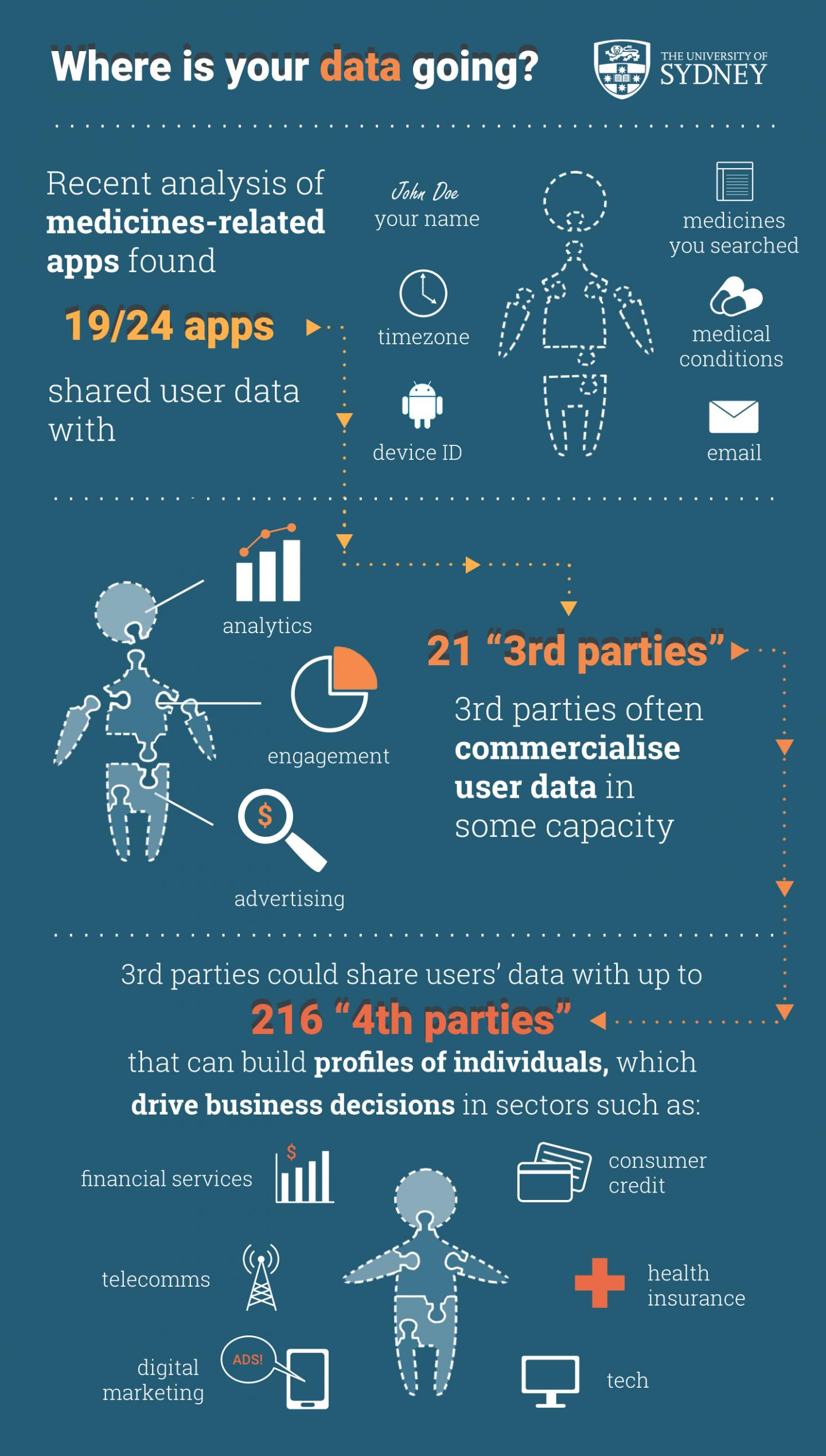 Of the sampled apps, most – 19 out of 24 or 79 percent – shared user data outside of the app. A total of 55 unique entities, owned by 46 parent companies, received or processed this data, including developers, parent companies (first parties) and service providers (third parties).

Third parties also advertised the ability to share user data with 216 ‘fourth parties’ including multinational technology companies, digital advertising companies, telecommunications corporations, and a consumer credit reporting agency. Only three of these fourth parties could be characterised predominantly as belonging to the health sector.

Several companies, including Alphabet, Facebook, and Oracle, occupied central positions within the network with the ability to aggregate and re-identify user data.

Call for greater regulation and transparency

“Most health apps fail to provide privacy assurances or transparency around data sharing practices,” she said.

“Health professionals need to be aware of privacy risks in their own use of apps and, when recommending apps, explain the potential for loss of privacy as part of informed consent.

“Regulators should also emphasise the accountabilities of those who control and process user data, while health app developers should disclose all data sharing practices and allow users to choose precisely what data are shared and where.”

0
donetmsiteserversecuusda March 24, 2019
No Comments Yet