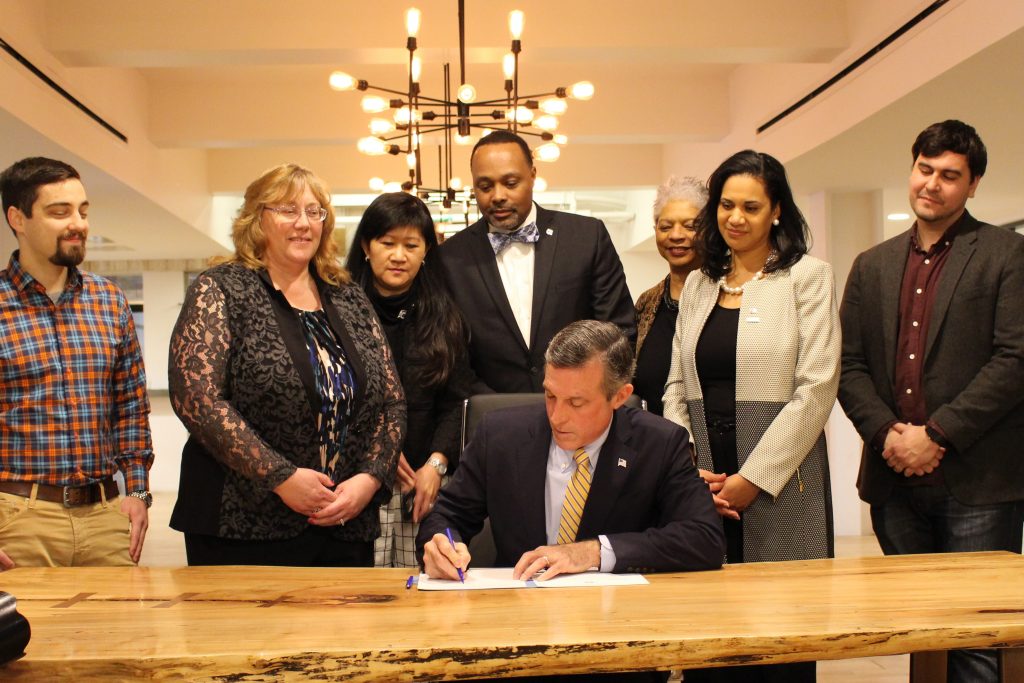 Governor John Carney on Monday signed Executive Order 18, expanding the Delaware Open Data Council to include members from all Executive Branch agencies to promote data sharing. The Governor was joined by members of his Cabinet, technology entrepreneurs and Open Data advocates at The Mill in Wilmington for the Executive Order signing.

The Council brings together a team from state government focused specifically on making more data available to members of the public via the state’s Open Data Portal which streamlines access to public information and enhances government transparency. Established by Executive Order 57 in October 2016, the Open Data Portal is a centralized website that connects the public with non-identifiable public data across state agencies and provides interactive features that allow users to browse and sort information. The public can utilize more than 200 data items through maps, charts, and graphs to visualize it in new and innovative ways. Since its launch, the Open Data Portal has had more than 3.5 million page views. Eleven new data sets were added last year, including Delaware business licenses and air quality monitoring, among others.

“Open Data and data sharing are an integral part of government transparency, efficiency and accountability,” said Governor Carney. “Expanding the Open Data Council to include members from all Executive Branch agencies will help facilitate the work we’ve begun through the Family Services Cabinet Council, and allow us to share and analyze data to effectively deliver services and allocate resources for Delawareans.”

The Delaware Open Data Council, which will now include members from 18 state agencies and offices, is charged with making data available to the public, establishing a statewide data strategy, and recommending standards and policies governing the posting of public data and data sharing among state agencies.

“Our state agencies have a vast treasure trove of data and we can tap into that potential to help solve real-world problems, improve the delivery of government services and enrich the quality of life for Delaware’s citizens,” said Chief Information Officer James Collins. “Great ideas can come from anyone, anywhere. By making this information available to everyone we create even more opportunities for innovative solutions.”

“Open data is all about building partnerships and using the power of information to fill the gaps between state agencies, community groups, businesses and the average Delawarean,” said Secretary of State Jeff Bullock. “The best ideas require collaboration to come to fruition, and I’m proud that the Department of State is a part of the next wave of new thinking in Delaware.”

“Over the past two years, Open Data Delaware has been excited to see the State’s commitment to open data grow,” said Ryan Harrington of Open Data Delaware. “In those two years, we have seen Delaware transition to a system that makes it easier than ever for anyone to access critical information about the state, giving advocates the opportunity to improve their communities and entrepreneurs more resources to grow companies. The inclusion of every Executive Branch agency into Delaware’s Open Data Portal furthers the ability for people to gain the information that they need to build upon this work.”

“Tech Impact is proud to support Governor Carney and his administration in expanding the Open Data Council,” said Tech Impact Executive Director Patrick Callihan. “Delaware has taken a leadership role in exposing data sets and enabling a transparent government. Some of that data has already been used to create public and social benefit for the state and this greater commitment will surely increase the opportunities to develop solutions to some of our most difficult social issues.”

Members of the public are invited to recommend additional datasets for inclusion in the Open Data Portal by visiting data.delaware.gov/nominate.

Can Open Data Feed the World?

0
donetmsiteserversecuusda February 12, 2018
No Comments Yet